Markets bet UK interest rates to hit 4% by May


Financial markets are betting the Bank of England will more than double interest rates by next May, as concern mounts about further rises in UK inflation.

The shift in expectations in the swap market — which anticipates interest rates of 4 per cent in May compared with 1.75 per cent today — are among the biggest swings in recent years.

The shift in expectations, fuelled by persistent increases in forecast inflation and soaring energy prices, has been reflected in other markets. In the UK gilt market the cost of two year borrowing for the government has risen more in the past two weeks than in any similar period since 2003.

The market moves will be reflected in the cost of corporate borrowing and fixed-rate mortgages, affecting companies and households even before the Bank of England takes decisions on interest rates in the months ahead.

Higher borrowing costs will be a further drag on UK economic activity and household and corporate finances already suffering from high energy, fuel and food prices — although City economists expect less of a jump in rates.

Traders in the overnight index swap market — which sets prices based on expectations of future official interest rates — are now betting that interest rates will rise to 2.75 per cent by the BoE’s November meeting before hitting 4 per cent in May.

Separately, the yield on 2-year government bonds — indicating the average interest rate over the next 24 months — is now trading at 2.94 per cent, compared with 1.83 per cent just a month ago.

Traders have become concerned as UK inflation has exceeded expectations almost every month this year — rising to 10.1 per cent in July — amid some City forecasts that prices will rise by more than 18 per cent.

With energy prices continuing to put pressure on inflation, the new retail gas and electricity price cap for October to December will be announced on Friday. Analysts expect Ofgem, the sector regulator, to raise the annual cost of energy for an average household from £1,971 to over £3,500.

Traders in government bond and interest rate futures markets pushed the expectations of interest rates higher when inflation moved into double digits last week and when Citi forecast inflation would hit 18 per cent this week.

The financial market forecasts for interest rates reflect the BoE’s comments that it would be willing to act “forcefully” if it felt inflation had become embedded into company and household expectations.

Economists are much less willing to bet on the BoE being so aggressive with monetary tightening. The consensus among City economists is that interest rates will peak at 2.5 per cent, but expectations are changing. 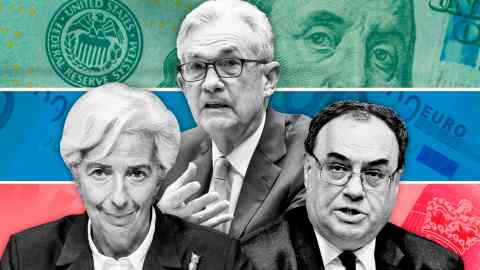 Paul Dales, chief UK economist at Capital Economics, which expects interest rates to reach 3 per cent, said market expectations had “jumped” in the past couple of weeks.

“At this stage I wouldn’t really want to rule anything out,” he said. “The point we were trying to make is that if our 3 per cent interest rate forecast proves to be wrong, at the moment it feels more likely that would be because rates peak at 3.5 per cent rather than 2.5 per cent — 4 per cent isn’t completely implausible anymore.”