Intel’s Mobileye scales back IPO valuation to below $16bn


Intel disclosed on Tuesday that it is targeting a maximum valuation of less than $16bn for the initial public offering of its Mobileye autonomous driving unit, as Wall Street continues to recoil from retreating tech stocks and other recently listed companies’ weak performance.

Mobileye hopes to sell its shares for $18-$20 apiece, giving it a value of $14.3bn-$15.9bn, far below the $50bn Intel was said to be seeking when it first announced a plan to take Mobileye public a year ago. The US chipmaker paid $15.7bn to purchase the unit in 2017, and it has since become one of the troubled company’s best-performing businesses.

The deal is set to be the first large technology IPO since January and is being closely watched for signs of investor appetite for further listings. The US IPO market ground to a halt this year thanks to a combination of economic and geopolitical uncertainty, market volatility and particularly poor performances among recently listed companies.

The IPO comes at a critical time for Intel, as it faces significant financial strains from increased investments in an effort to regain the leadership in chip manufacturing it lost to TSMC. The maximum proceeds from the sale, $820mn, will do little relieve the financial pressure.

Mobileye has said it will use an unspecified amount from the IPO to pay down some of the $3.5bn that Intel has lent it and use the rest for working capital. Intel has agreed to convert the unpaid portion of the debt into equity in Mobileye. The chipmaker has claimed that the IPO is being undertaken to “unlock value” for its shareholders rather than improve its own finances, and recently agreed a novel deal that would bring in $15bn in private equity to help support its manufacturing plans.

Founded in Israel in 1999, Mobileye initially focused on producing “collision-avoidance” technology, but has since expanded its focus to enabling “fully autonomous driving”. As a result, it lists competitors ranging from specialist automotive suppliers such as Bosch and Continental to carmakers like Tesla and big tech groups such as Apple and Didi Chuxing. 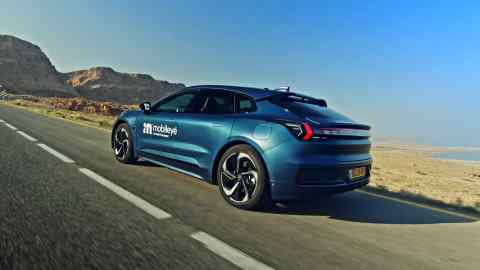 Chief executive Amnon Shashua co-founded Mobileye and continued to lead the group after its takeover. However, the company noted in its prospectus that Shashua “does not devote his full time and attention to our company”, serving as chair of three other companies and teaching at the Hebrew University of Jerusalem.

Bankers and investors have emphasised that companies trying to go public after the recent downturn should at least be able to show a clear path towards profitability, in contrast to recent years when many companies focused on revenue growth at all costs.

Like much of the auto industry, Mobileye has been affected by a shortage of semiconductors since the start of the pandemic, and the company said in the prospectus that it “anticipate[s] that such shortages will continue”.