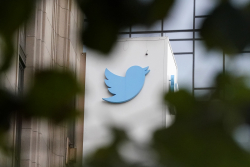 I don’t give a shit about the Twitter files. I am, famously, not a fan of Twitter, as I see it as the virtual space in which conformity is rigidly enforced. I was guilty, notoriously, of very bad behavior on Twitter, which led to a public shunning of me that was predictable, understandable, and justified. For the five years since that happened, I have considered my Twitter privileges revoked, and I will go on feeling that way. I do check the service twice a week for a half-hour or hour or so, as I find it’s necessary to keep up with the conversation, given that I do a lot of media criticism.