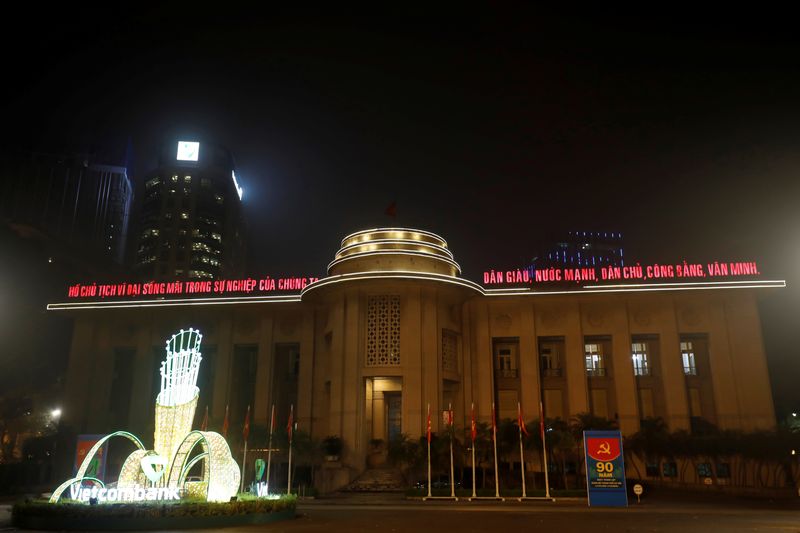 HANOI (Reuters) – Vietnam’s central bank said on Tuesday it was making efforts to shore up foreign exchange reserves by buying up more U.S. dollars, after it was forced to sell a large amount of greenback earlier in the year to support its dong currency.

“There have been positive signals on the foreign exchange market that allow the central bank to continue its purchases of foreign currencies,” its deputy governor, Dao Minh Tu, told a news conference, without elaborating.

Vietnam does not provide regular disclosure on the size of its foreign exchange reserves. Late in 2021, it put the figure at $100 billion.

The State Bank of Vietnam (SBV) earlier this year was forced to sell a large amount of U.S. dollars to the market to support the dong, which has hit record lows in recent months from capital outflows as the U.S. Federal Reserve repeatedly raises interest rates to tame inflation.

Market analysts said the SBV had sold about $20 billion worth.

Strong foreign direct investment inflows and a large trade surplus this year have helped slow the weakening of the dong, which has so far this year lost about 3% against the dollar.

Tu also said the inflation rate should be below 4% in 2022, and that non-performing loans in the banking system were under control.

In a statement earlier on Tuesday, the SBV said it will manage monetary policy in a flexible way to keep inflation at 4.5% next year, aiming to “stabilise the monetary and foreign exchange markets to ensure the safety of the banking system”.

The central bank early this month raised its 14% cap on credit growth for the banking system this year by 1.5 to 2.0 percentage points, following a credit crunch in the property sector and its financial markets.

Vietnam has one of the fastest-growing economies in Asia, backed by strong manufacturing and exports, with gross domestic product growth of 8% forecast this year. Its economic expansion also relies heavily on strong credit growth.

The Southeast Asian country is forecast to record a trade surplus of $11 billion this year.

The government on Tuesday said foreign direct investment inflows are expected to rise 13.5% from last year to $22.4 billion.